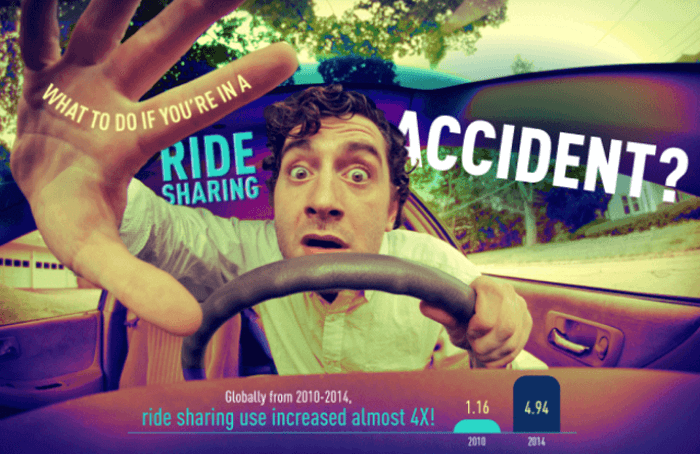 Ride Sharing Is Convenient. But What Happens If There’s an Accident?

Despite all the recent scandals from Uber, if you’re like me, you’re using ridesharing services more and more these days. However, after a recent close call, while using a ride sharing service on a business trip to Silicon Valley, I realized that while I had been using them for a while, I had no idea what to do if I were to get an accident!

We were inches away from rear-ending the car in front of us!

What did I really know about the guy who was driving me around in crazy Bay-area traffic?

Let’s face it: Ridesharing and ride-hailing services are getting to be part of the mainstream. As more people use them, more problems are becoming apparent. Fifteen percent of adults in the United States have used a ridesharing app and of those, 17% use one on a daily or weekly basis. Young adults between the ages of 18 and 29 are the most likely demographic to use a ridesharing app.

The biggest problem that is yet to be solved is who pays in the event of a ridesharing accident. Ridesharing companies have rules about this as do insurance companies, but there’s still a lot of gray area even after many years of ridesharing apps being on the market.

When Does Coverage Start and Who Pays for What?

When you drive for a ridesharing company, you will have your own personal insurance and whatever coverage is included with your ridesharing contract. If you are in an accident and your passenger is injured, they may have a difficult time collecting on their injuries.

According to NBC news, “There are a few reasons UberX costs less: A regular person can become an UberX driver; they’re not licensed chauffeurs, and they use their own cars. UberX drivers can also use their existing personal auto insurance policy. They’re not required to get commercial liability insurance. So if an UberX driver gets into an accident, an insurance company can deny the claim.

“States and municipalities are scrambling to figure out how to deal with fleets of unregulated independent contractors picking up and dropping off travelers for money on their streets.” Although this report is several years old, the issues have largely not been resolved on a national scale as of yet.

Who’s Driving You is a website that catalogs news and issues surrounding ridesharing companies and advocates for public policy changes to protect both drivers and riders. According to their FAQs, “Uber, Lyft, and Sidecar all claim to possess $1 million ‘liability’ insurance policies. This is intended to sound impressive and reassuring, but experts concur ‘ridesharing’ insurance contains treacherous gaps in coverage. For example, the period during which a TNC driver has the app turned on and he’s waiting to be pinged is now commonly known as ‘Period 1.’ ”

Though a new California law has wisely mandated TNCs provide primary coverage for Period 1 beginning July 1, 2015, and new hybrid insurance policies are available to cover this phase in certain cities and states, TNCs continue to operate without properly insuring this phase of operations in most cities and states. Personal injury and wrongful death suits are currently being litigated in state courts around the country that will test the limits of the existing TNC policies.

Taxicabs are required to carry expensive primary commercial auto liability insurance coverage costing between $5,000 and $6,000 per vehicle. TNCs are evading these costs to maximize profits.”

What to do if You’re in a Ridesharing Accident

The more people use ridesharing services, the more frequent accidents will become.

Between 2014 and 2016, for-hire vehicle crashes have more than tripled. Ridesharing insurance can help bridge the gap, but currently, only 23% of ridesharing drivers have purchased it. If you are in a ridesharing accident, whether you are the driver or the passenger, you need to be prepared.

Drivers should move the car out of traffic, call police and EMS if necessary, and signal other drivers using hazard lights, cones, or flares. Passengers should gather as much information as they can about the driver, including which company they work for, their contact information, and their insurance information.

After the accident, you will have to decide whether to hire a lawyer, because oftentimes navigating the system requires a professional, and it can be especially difficult if you are seriously injured.

Laws are continually changing to reflect the issues that keep arising with ridesharing apps, so look into the laws in your city or state to determine whether you will be covered in the event of a ridesharing accident, whether you are the passenger or the driver.

Forty-two percent of all adults do not believe that ridesharing drivers should have to follow the same rules as taxis, though as accident numbers escalate and awareness is raised of the risks, that figure may decline.

Automobile and motorcycle accidents are the leading cause of personal injury and death in the U.S., with almost three million injuries and over 40,000 deaths each year.  If you or a loved one has been involved in a motor vehicle accident because of the negligence of others, you may be entitled to payments for personal injury or wrongful death.  We may be able to help you to recover payments for medical and funeral expenses, lost wages, physical pain and emotional suffering, disability, and future losses. If you’ve been hurt in a ridesharing accident, Contact attorney Frank Giunta today!