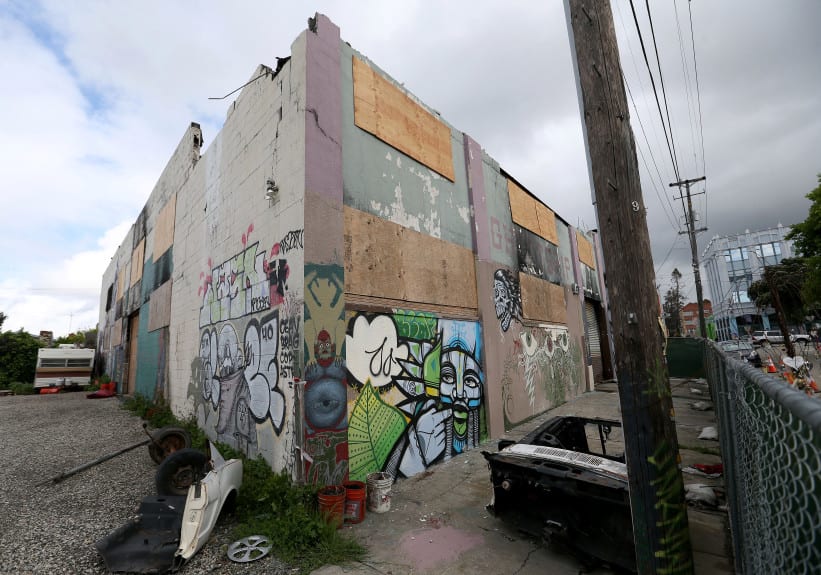 Lawyers: PG&E ‘knew or should have known’ of electrical dangers at Ghost Ship

OAKLAND — Family members of Ghost Ship fire victims, survivors and former residents sued Pacific Gas & Electric on Tuesday, adding the utility to more than a dozen defendants already named in a massive lawsuit and claiming it “knew or should have known” of electrical dangers in the warehouse where 36 people died in a fire Dec. 2.

The lawsuit, filed in Alameda County Superior Court on Tuesday morning names PG&E, the property owner and master tenants of the Ghost Ship and the two adjoining shops, as well as a number of other individuals associated with the dance party held the night the fire broke out, trapping people who were on the second floor and could not find their way out in the thick smoke.

This marks the first time that the utility has been included in litigation associated with the Ghost Ship fire.

According to the complaint, PG&E was negligent for failing to monitor the power distributed to the building, including spikes, power outages and irregularities. Lawyers for the plaintiffs stated that PG&E had installed a smart meter above the Boost Mobile store on International Boulevard, a few doors down from the Ghost Ship warehouse. According to attorneys, PG&E “knew or should have known” of the dangerous and defective nature of the electrical systems that posed an “imminent threat” to the inhabitants of the Ghost Ship and their guests.

At issue is a utility rule which would have required separate meters for each of the adjacent businesses on International Boulevard, as well as Custom O’s Autos and the Ghost Ship warehouse on 31st Avenue. According to the complaint, if the utility had fulfilled its duties, an inspection would have followed and PG&E would have noticed the “overloading of the circuitry,” “substandard and missing meters,” and the power connection that ran from the auto body shop to the Ghost Ship.

Joining the legal team will be the law firm Girardi & Keese, a Los Angeles-based firm famous for taking on PG&E in the Hinckley, Calif. case that inspired the movie Erin Brockovich, as well as the San Bruno pipeline explosion.

“Was this just an act of God, lightning struck somebody in the parking lot, or was it preventable?” Tom Girardi said. “… As we looked into it further, we found there was a responsibility of other people that should have known better. It’s one thing if someone owns a business and doesn’t cross a ‘t’ or dot an ‘i,’ but if you have somebody like PG&E – they have been down this road before. They know what they should be doing. They should be watching.”

For the first time, the lawsuit also names Ben Cannon, a tenant of a building next door to the warehouse, who was tapped by master tenant Derick Almena and property manager Kai Ng to perform unlicensed and unpermitted electrical work on the building following a 2014 transformer fire.

Cannon, an unlicensed contractor, had reported to Ng and Almena that the smaller transformer had been overloaded. Cannon replaced the burned-out transformer with a new 25-kilovolt-amp transformer and forwarded an invoice to Ng, detailing “grossly unsafe” conditions that would require $15,000 in upgrades “to get the whole building into a safe state.”

Although investigators have not officially announced the cause of the fire, sources have told this news organization it is blamed on an overloaded electrical system.

PG&E has not seen the lawsuit but utility officials have reviewed 10-plus years of records pertaining to the Ghost Ship warehouse and neighboring businesses, spokeswoman Tamar Sarkissian said.

“We have no reports of electric theft or any other anomalies from this location or the adjacent premises,” Sarkissian said in a statement. “We’re fully cooperating with authorities as they investigate this tragic event.”

According to emails obtained by this newspaper, Ng had planned on getting quotes from Cannon to install electrical submeters in each of Ng’s commercial units that would allow the landlord to gauge how much electricity each was using. The submeters “were not managed by PG&E,” Ng wrote, and he offered to pay for half of the installation costs at $1,232 per unit.

In the December 2014 statement, which showed usage of 8,000 kWh over 33 days, amounted to a monthly bill of more than $1,400. An email from Kai Ng to resident Max Harris, named as Max Ohr in the lawsuit, in October 2016 cited mounting electrical bills that were “well over $2,000 per month.”

Ng’s email was in response to Harris’ attempts to lease defendant Omar Vega’s Custom O’s auto body shop next door, so that the artist collective could gain access to the electrical panel and “ensure there are no more blackouts due to combined overexertion across the 3 warehouse units.”

Brian Dunn, partner with the Los Angeles-based Cochran Firm which has joined the lawyers’ group, said that the lawsuit against PG&E will give “more concrete answers for the survivors.”

“They really want to know what happened. How was this type of situation allowed to occur?” Dunn said. “Closure is the first component of the process of seeking justice. PG&E knew there was a situation out there that could potentially be unsafe. They probably weren’t expecting a disaster, but they didn’t take steps to prevent it from occurring.”

“My birthday is coming up too. It’s going to be difficult for a long time,” Grandchamps said. “Nothing will be the same.”

Grandchamps feels anger and sadness when she thinks of her son’s last moments, and what she imagines he tried to do to escape.

“What any parent wants to see is justice for the murder of their child, but in every situation, there are loopholes that let you get away with that,” Grandchamps said. “I’m trying to learn how to create justice, to seek justice, to know whose door to knock on to get justice. Not just for my son, but for all the artists that have died along the way from improper housing situations or maintenance. We should all be able to live somewhere.”

PG&E’s inclusion in the Ghost Ship fire lawsuit comes just as the utility nears a final settlement in a lawsuit over the fatal San Bruno pipeline explosion that killed eight people in 2010. A $90 million shareholder settlement making its way through San Mateo County Superior Court is the last remaining legal proceeding in that incident.

In January, a federal jury convicted PG&E on six criminal felony counts related to the explosion, including obstruction of justice, labeling the utility a felon and requiring it to run a three-month advertising campaign admitting its guilt. The state Public Utilities Commission fined the utility $1.6 billion in 2015 over the explosion, the largest fine in the regulatory agency’s history.

A property owner whether residential or commercial has a duty to maintain the premises in a way that minimizes the risk of injury to visitors.  This requires that the owner either repair or remedy any known dangers or provide adequate warning of dangerous conditions. We handle all matter related to claims based on the negligent maintenance of residential or commercial property, including:

Injuries resulting from broken steps, stairs, sidewalks, pavement or driveways, or from damaged or  defective carpet or flooring

Falls on slippery floors, sidewalks, steps or other walkways