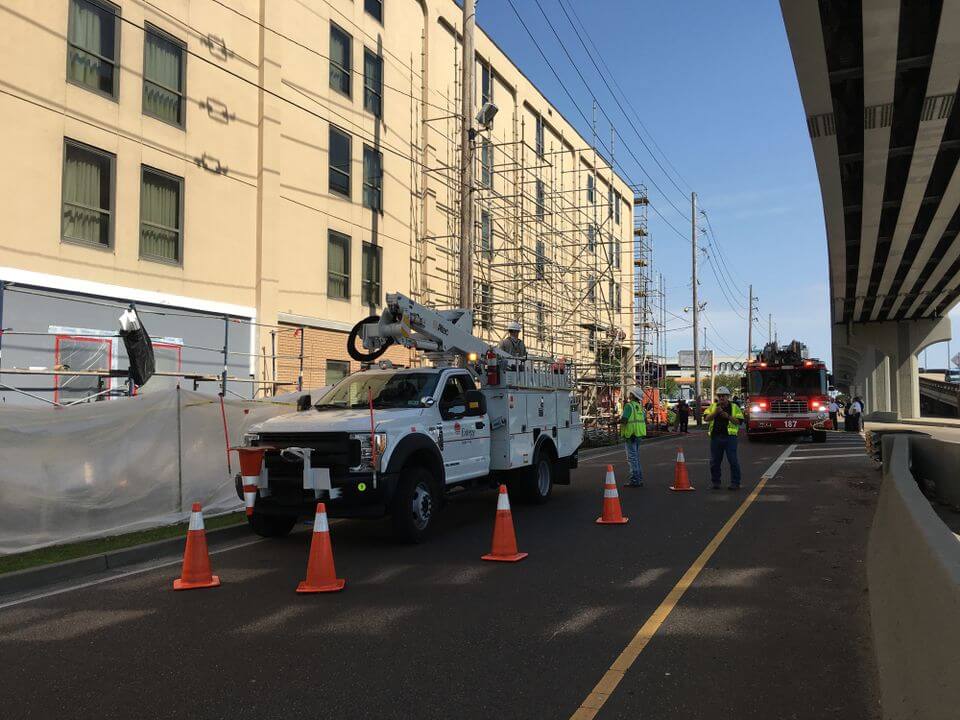 ‘It sounded like an explosion’: 6 shocked by power line at Metairie hotel

Debbie Rogers had just arrived to open her Metairie store, Causeway Upscale Consignment and Design Center, around 9:45 a.m. Thursday (April 19) when a loud boom echoed through the air.

“It sounded like an explosion,” said Rogers, who thought perhaps a vehicle had crashed on the busy Causeway Boulevard overpasses and roadways that run in front of her business.

But when Rogers turned around, she noticed a large puff of smoke rising at the Hampton Inn, 2730 N. Causeway Blvd., Metairie, located directly across the thoroughfare. She saw several men on the partial ring of metal scaffolding surrounded the hotel, which is undergoing renovations.

“I noticed (the scaffolding) was starting to rock. I saw 1, 2, 3 things fall,” recalled Rogers, who wasn’t sure whether the objects were people or equipment. “I heard a sound like a woman’s voice, screaming and screaming.”

Authorities say six construction workers were injured by electrical shocks when the scaffolding they were erecting touched an overhead power line that runs adjacent to the hotel. The men, who suffered “various burns,” were taken to University Medical Center in New Orleans, according to Chief Dave Tibbetts of the East Bank Consolidated Fire Department.

No information was available about the men’s conditions or the name of the company for which they worked on Thursday.

As Rogers noticed workers carrying a man away from the scaffolding, she said she called 911 to report the incident. Just down the street from the hotel, Shannon Bell and Tony Meyer stopped working when the electricity to their building suddenly went out, followed by the sounds of several emergency sirens.

They walked over to the Hampton Inn as firefighters and paramedics rushed to treat the injured workers. The men were alert but distraught, according to Bell, who was told at least one of the workers fell from the framework.

“One man was crying. It was his friend who fell off the scaffolding,” she said.

While many of the workers climbed down from the scaffolding, firefighters had to help down another worker who seemed unable to descend on his own.

“He was sitting up there, woozy,” Meyer said. “Someone was holding him up for a good 20 minutes before they got him down.”

Cell phone video taken by Rogers shows the worker seated on the scaffolding about four stories up as a co-worker with a hard hat sits behind him, holding him with two arms. Another man can be seen talking to the worker as firefighters move a ladder truck in place to help him down.

Entergy crews arrived on scene and cut power to the electrical lines. Entergy Spokesman Michael Burns identified them as a primary distribution line commonly found in neighborhoods in the region.

“At this time, we are conducting an internal investigation and working closely with local authorities,” he said.

Jefferson Parish Sheriff’s Office investigators and fire officials inspected the scaffolding and the ground around it. A long metal pipe with a blackened burn mark could be seen at the base of the framework. A on the hotel also had a burn mark.

In a nearby parking lot, a small group of construction workers who were not taken to the hospital kneeled together in prayer.

“We said The Lord’s Prayer, and then we prayed for the injured people and gave thanks that even more of us didn’t get hurt or burned,” one of the workers said.

Curious Hampton Inn guests peered out of windows and watched first responders from just outside the lobby of the hotel, which was also without power. The Hampton Inn is conducting an investigation but did not have any details to release Thursday morning, Human Resources Director Kellie Kulivan said.

Electrical injuries caused by carelessness pose a grave risk of death.  In the home setting, frayed or defective electrical wiring, defective electrical appliances water heaters, furnaces or natural gas leaks may cause fires or explosions that take the live of home occupants. If you or a member of your family has sustained an electrical injury or death, call our firm.  Our team has electrocution and fatal injury cases for many years.  Our experience is extensive.  Even if you are not sure if your specific electrocution situation requires action, there is no reason why you shouldn’t call us and find out. Contact Giunta Law Today.