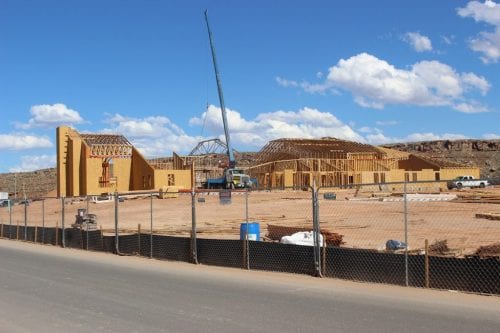 By  Cody Blowers at stgeorgeutah.com

ST. GEORGE — Three construction workers were injured – two of whom were transported to the hospital – Wednesday afternoon when they were struck by large trusses that fell to the ground after a failure occurred while the trusses were being raised to the top of the structure.

At 3:30 p.m. emergency responders were dispatched to an industrial accident reported at a construction site located at 3202 Crimson Ridge Drive, where a new chapel for The Church of Jesus Christ of Latter-Day Saints is being built.

Firefighters, officers and three ambulances arrived on scene, and within minutes two of the men were quickly transported by ambulance to Dixie Regional Medical Center. The third injured worker was treated at the scene by Gold Cross paramedics, St. George Battalion Chief Darren Imlay said.

A field supervisor from Gold Cross also responded and remained on scene to assist, which Imlay said was due to the number of workers injured.

The preliminary investigation into the incident revealed that the workers were setting roof trusses when there was some type of failure, possible with the equipment, causing several trusses to fall to the ground, striking the workers in the process.

The incident was initially reported as workers injured in a fall, but Imlay said they received additional information once they arrived on scene.

“They could have been on ladders when the failure occurred, and were possibly struck then,” he said, “however we don’t have all of the details at this time and we won’t know more until later.”

One witness who lives near the construction site and preferred to remain anonymous said that they heard a loud “crashing” noise and observed several of the workers run into the unfinished building immediately after. The trusses that were raised toward the top of the structure were no longer there, the witness said.

The large crane parked next to the southwest side of the structure was taped off with “caution” tape.

The nature or severity of the injuries are unknown at this time.

Construction is one of the United States’ largest industries and unfortunately, construction site accidents kill and injure thousands of workers each year.  Despite legal and trade provisions in place to prevent construction accidents, one out of every ten construction workers suffers some kind of on the job injury which can include:

Although many injured construction workers will be entitled to Workers’ Compensation benefits, these benefits will not cover all of the expenses faced by an injured worker and generally do not cover pain and suffering and the full range of damages available to the loved ones of a worker who is killed in an accident.  Moreover, there are often claims to be made outside of Workers’ Compensation against negligent third parties and contractors.

If you’ve been injured in a construction accident, Contact Frank Giunta today!