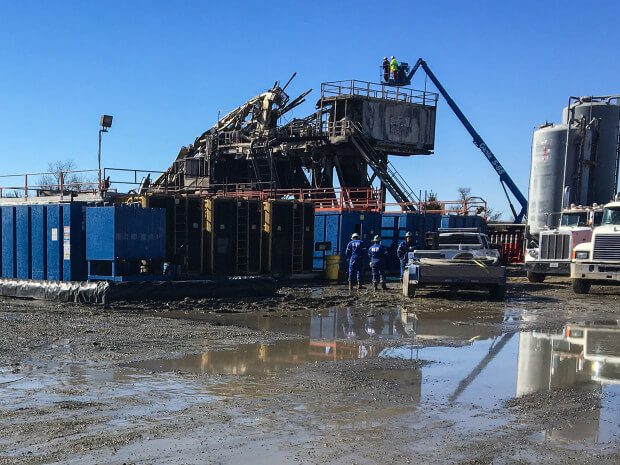 Federal and state authorities are investigating the cause of the deadly explosion and fire at a natural gas drilling rig in southeastern Oklahoma on Monday. Five workers died in what appears to be one of the country’s deadliest onshore drilling accidents.

The well site, located near the town of Quinton, 100 miles south of Tulsa, was operated by Oklahoma City-based Red Mountain Energy. Patterson-UTI Energy, of Houston, owns and operates the drilling rig, which exploded and caught fire about 8:45 a.m.

The cause of the explosion and fire is not yet known. The Occupational Safety and Health Administration and the Chemical Safety Board are investigating, as is the Oklahoma Corporation Commission, the state’s oil and gas regulator.

A day after the explosion, Oklahoma’s Supreme Court struck down a portion of the state’s workers compensation law, ruling 8-0 that oil and gas companies can be sued when workers are injured or killed. Oklahoma law holds operators responsible for well site safety, not contract drillers or oil-field service companies.

A preliminary report from a commission investigator found the fire that engulfed the rig was fed by an “uncontrolled gas release.” A rig worker attempted to activate a device known as a blowout preventer to shut off the well but was unable to, the inspector reported.

The fire at the wellhead kept emergency crews at bay for hours and created a black plume of smoke visible for miles. One worker who escaped with burns was taken by helicopter to a hospital and later released; sixteen other workers who fled the burning rig were uninjured.

“From what I was told from many of the survivors, there was an explosion, they heard a loud boom, they seen fire and they ran,” Pittsburg County Sheriff Chris Morris said. “Everybody was trying to survive.”

The five men who died were found in the “dog house,” a control room located near the drilling platform. The Oklahoma Department of Emergency Management identified them as Roger Cunningham, 55, of Seminole; Josh Ray, 35, of Fort Worth, Texas; Cody Risk, 26, of Wellington, Colo.; Matt Smith, 29, of McAlester, and Parker Waldridge, 60, of Crescent.

“Our thoughts are with those whose lives have been impacted beyond words by this tragedy. You’ll be in our prayers over the coming days and weeks,” he said. “Our priority, sincerely, is the people who have been affected and the safety of those who will be called upon to work the well site and investigate.”

In a statement, Patterson-UTI President and CEO Andy Hendricks said his employees were “deeply saddened” and pledged a thorough investigation of the accident.

“There is nothing more important to us than the safety of our employees and others we partner with in the field. Tonight, our thoughts and prayers go out to all those affected and their loved ones.”

Patterson-UTI has struggled for years with one of the worst safety records in the drilling industry, OSHA data show. A 2008 report from the U.S. Senate Health, Education, Labor and Pensions subcommittee identified 12 deaths at Patterson-UTI drilling sites in Texas alone. Inspections of drilling sites the company operates in Oklahoma and other states have turned up numerous violations, OSHA data show.

Drilling is a dangerous job. At least 60 workers in Oklahoma have died working for energy companies or on the job at oil and gas drilling sites from 2011-2016, data from the U.S. Bureau of Labor Statistics show. In 2012, a sharp rise in deadly oil-field accidents led to a voluntary statewide shutdown of drilling activity so rig work crews could review safety standards and procedures.

Individuals injured by oil field accidents often suffer catastrophic injuries, including wrongful death.  Our team has the legal and medical experience to effectively handle a range of cases involving serious & complex injuries caused by explosions and burns, falls, defective products and equipment, toxic fumes and fires. We are committed to pursuing an aggressive case against all liable parties and will seek to collect the full compensation you are entitled to for lost wages, pain and suffering, long-term care needs, disability and impairment, and any additional personal or financial losses you have sustained. Contact Frank Giunta if you need expert legal help!